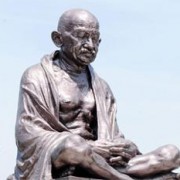 A 26-year-old UK-based NRI hotelier has donated 100,000 pounds for the statue of Mahatma Gandhi planned for Parliament Square in London, becoming the youngest donor.

Vivek Chadha, director of Nine Hospitality Limited and a hotel owner, residential developer and commercial investor in UK real estate, is a self-confessed follower of Gandhi.

He graduated as a civil engineer in 2010 from University College London, also the alma mater of the Father of the Indian Nation.

“I am interested in particular how Gandhi emphasised the privilege of giving and practiced compassion in creative ways. The fact that Gandhi concentrated all his energy in the service of others is a great example of how all young people should follow this idea in our day-to-day lives,” Chadha said.

“It is very important that young people like Vivek step forward and donate towards this noble cause and he joins a very important growing group of British Asians who have responded generously,” said economist Lord Meghnad Desai, founder and chair of the Gandhi Statue Memorial Trust who pointed to the worldwide support for the project.

More than 50 per cent of the money raised so far has come from UK, and 80 per cent of our 180 donors are British. Many small donations have come to the charity as people have reached out. More than 90,000 pounds have been received through smaller, mostly UK-based donors who have given anything between 1 to 15,000 pounds.

The trust has achieved its goal for the project’s budget target of 750,000 pounds within approximately three months.

Other major donors include InfosysBSE co-founder Narayana Murthy and his family, and Bajaj auto chief Rahul Bajaj who both donated 200,000 pounds each.

The trust claims pledges continue to pour in from the UK and all over the world for the iconic sculpture designed by renowned sculptor Philip Jackson, who has portrayed Gandhi draped in a shawl based on pictures from his last visit to the UK in 1931.

he sculpture will go up at Parliament Square next to the likes of Britain’s war-time Prime Minister Winston Churchill and South African anti-apartheid leader Nelson Mandela in the coming months and is expected to be inaugurated by Indian Prime Minister Narendra Modi.